A fraction is a part of a whole. In the last lesson, you learned how to add and subtract fractions. But that’s not the only kind of math you can do with fractions. There are times when it will be useful to multiply fractions too.

Click through the slideshow to learn how to write a multiplication problem with fractions.

Try setting up the multiplication problem below. Don't worry about solving it yet!

A recipe calls for 2/3 of a cup of milk. You want to cut the recipe in half.

Note: Although our example says the correct answer is 2/3 x 1/2, remember, with multiplying order does not matter. 1/2 x 2/3 would also be correct.

Now that we know how to set up multiplication problems with fractions, let's practice solving a few. If you feel comfortable multiplying whole numbers, you're ready to multiply fractions.

Click through slideshow to learn how to multiply two fractions.

Try solving the multiplication problems below.

Multiplying a fraction and a whole number

Multiplying a fraction and a whole number is similar to multiplying two fractions. There's just one extra step: Before you can multiply, you'll need to turn the whole number into a fraction. This slideshow will show you how to do it.

Click through the slideshow to learn how to multiply a fraction and a whole number.

Try solving the multiplication problems below. 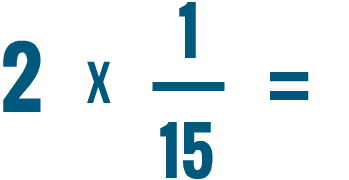 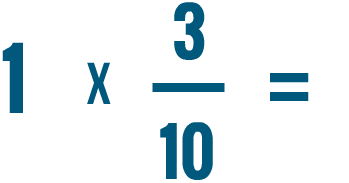 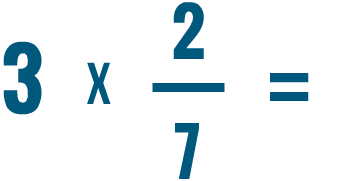 Over the last few pages, you've learned how to multiply fractions. You might have guessed that you can divide fractions too. You divide fractions to see how many parts of something are in something else. For example, if you wanted to know how many fourths of an inch are in four inches, you could divide 4 by 1/4.

Let's try another example. Imagine a recipe calls for 3 cups of flour, but your measuring cup only holds 1/3, or one-third, of a cup. How many thirds of a cup should you add?

We'll need to find out how many thirds of a cup are in three cups. In other words, we'll need to divide three by one-third.

Try setting up these division problems with fractions. Don't worry about solving them yet!

Now that we know how to write division problems, let's practice by solving a few. Dividing fractions is a lot like multiplying. It just requires one extra step. If you can multiply fractions, you can divide them too!

Click through the slideshow to learn how to divide a whole number by a fraction.

Try solving these division problems. Don't worry about reducing the answer for now. 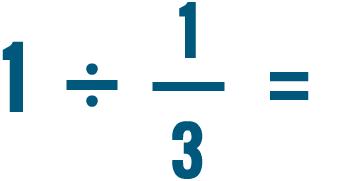 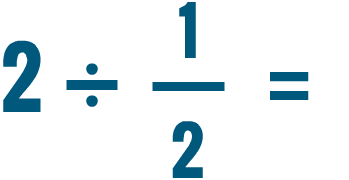 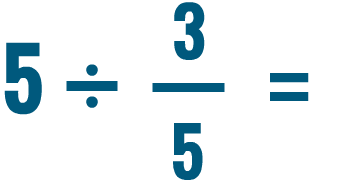 We just learned how to divide a whole number by a fraction. You can use the same method to divide two fractions.

Click through the slideshow to learn how to divide with two fractions.

Try solving these division problems. Don't worry about reducing the answer for now.

As you learned in the previous lesson, whenever you're solving a problem with a mixed number you'll need to convert it into an improper fraction first. Then you can multiply or divide as usual.

Even the answer looks complicated. It's 525/700, or five hundred twenty-five seven-hundredths. What a mouthful!

If you don't like working with large numbers, you can simplify a problem like this by using a method called canceling. When you cancel the fractions in a problem, you're reducing them both at the same time.

Canceling may seem complicated at first, but we'll show you how to do it step by step. Let's take another look at the example we just saw.

First, look at the numerator of the first fraction and the denominator of the second. We want to see if they can be divided by the same number.

Then we'll divide the bottom number on the right: 14. 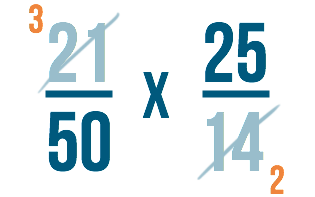 Our problem looks a lot simpler now, doesn't it?

Let's look at the other numbers in the fraction. This time we'll look at the denominator of the first fraction and the numerator of the second. Can they be divided by the same number?

Next, we'll cancel just like we did in step 2.
We'll divide our bottom number on the left: 50.

Then we'll divide the top number on the right: 25.

We'll write the answers to each problem next to the numbers we divided. 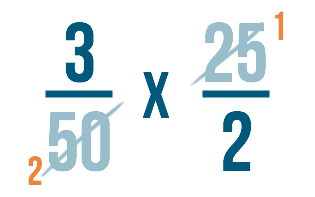 Now that we've canceled the original fractions, we can multiply our new fractions like we normally would. As always, multiply the numerators first:

Then multiply the denominators:

We could also say that we're reducing 525/700 to 3/4. Remember, canceling is just another way of reducing fractions before solving a problem. You'll get the same answer, no matter when you reduce them.