Windows 8.1 is an operating system designed by Microsoft. Windows 8 introduced a lot of new changes, and many people found it difficult to use. Windows 8.1 is very similar to Windows 8, but it addresses some of the problems people had with Windows 8.

There have been many different versions of Windows over the years, including Windows 7 (released in 2009), Windows Vista (2006), and Windows XP (2001). While previous versions of Windows mainly ran on desktop and laptop computers, Windows 8 is also designed to run on tablets. Because of this, the interface has been simplified so it will work with touchscreens.

An operating system manages all of the hardware and software on a computer. Without it, the computer would be useless. To learn more about how operating systems work, check out Understanding Operating Systems and Getting to Know the OS in our Computer Basics tutorial.

How is Windows 8 different from earlier versions?

There are many new features and changes in Windows 8, both small and large. These changes include a redesigned interface, online features, and improved security.

The first thing you'll notice about Windows 8 is that it looks totally different from previous versions of Windows. The all-new interface includes features like the Start screen, live tiles, and hot corners.

Many people are starting to save their files and other information online (also known as the cloud). One way to do this is with Microsoft's OneDrive service (previously call SkyDrive). Windows 8 is designed to connect seamlessly to OneDrive, as well as to other online services like Facebook and Twitter.

To learn more about Microsoft's online services, check out our Microsoft Account and OneDrive and Office Online tutorials.

When Windows 8 was released in 2012, many users complained that it was difficult and confusing to use, especially compared to older versions of Windows. Windows 8.1 is an update for Windows 8 that includes a number of improvements and features to address some of these issues. Below are some of the most helpful and notable features:

If you already have Windows 8, you should now able to upgrade to Windows 8.1. Your computer may be updated to Windows 8.1 automatically, but you can also update it manually. To do this, open the Windows Store app from the Start screen, then select Update Windows. 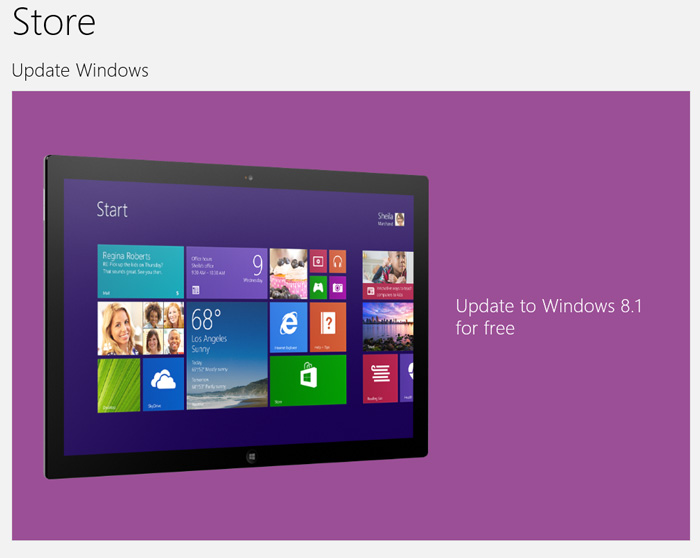 You can also review this page from Microsoft if you're having trouble updating to Windows 8.1.