When you multiply, you're basically adding a certain number more than once. For instance, if you eat 4 pieces of candy, then you eat another 4, then 4 more, you can say that you multiplied the amount of candy you ate. 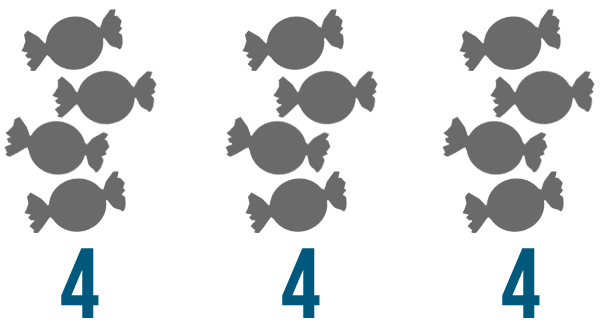 Multiplication happens all the time in real life. For example, consider the situation below.

As you just saw, a multiplication expression is written like this:

You can read that expression as two times six. The multiplication symbol (x) can also be called the times symbol. Remember, you always put it between the numbers you want to multiply.

Many real-life situations can be expressed with multiplication. For instance, imagine that you want to make three cakes. The recipe says that each cake will need two eggs. In other words, you need 3 x 2 eggs. 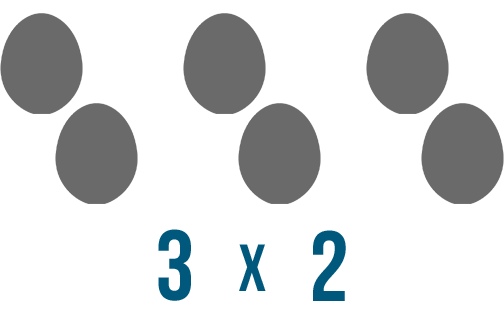 Write the following situations as multiplication expressions. Don't try to solve them yet.

You have six pairs of two socks each.

You need to take two pills four times a day.

You can use counting and adding to solve some small, simple multiplication problems. For example, on the last page, we were trying to figure out how many eggs we'd need to make three cakes. Each cake needed two eggs, so we wrote the problem like this: 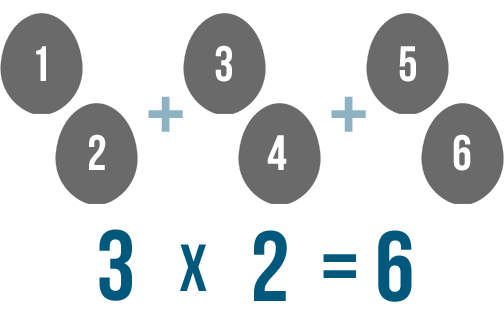 While this works for small problems, counting large numbers can take a long time— and it's pretty boring too. For this reason, most people memorize common multiplication problems so that they can solve them quickly. If this sounds hard, don't worry. The more you practice, the easier it will be to remember the answers to problems.

Solve the following multiplication problems. You can use the times table as a reference if needed. Check your answer by typing it into the box.

Practice multiplication with these problems. If you want, you can use the times table. There are 3 sets of problems. Each set has 5 problems.

Return to Playlist: Multiplication and Division
Next:Multiplying 2- and 3-Digit Numbers