A decimal is another way to write a fraction. You can think of a decimal as a part of a whole number. It is less than 1 whole thing, but more than 0.

You may not realize it, but you see decimals a lot in real life. One of the most common examples is money. 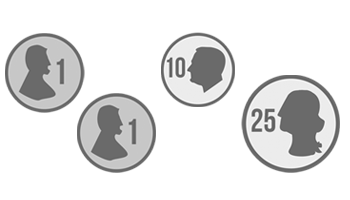 Do you recognize these coins? We have a quarter, a dime, and two pennies. You could write each of these as a decimal. That's because each coin is worth less than a whole dollar.

Click through the slideshow to learn how decimals work.

As you saw on the last page, decimals look a lot like a regular numbers, with a few important differences. First, all decimals have a decimal point (.). The decimal point looks like a period. Any number to the left of the decimal point is a whole number. The numbers to the right are like a fraction—they're less than 1 whole but more than 0.

For example, let's take a look at this decimal.

9 is on the left of the decimal point, so we have 9 whole things. 6 is on the right, so we also have 6 parts of a whole.

We see written decimals all the time in real life. For example, you might know that the average body temperature is 98.6 degrees. Or you might tune in to a radio station like 97.5. But do you know how to read these decimals out loud?

Click through the slideshow to learn how to read decimals.

Try reading the decimals below aloud.

What if you had to read this decimal out loud?

Even though we use decimals when we use money, we read them slightly differently. Instead of three point two three, or three and twenty three-hundredths, we'll say three dollars and twenty-three cents.

You could also read it like this: "three twenty three". To save time, most people leave out the decimal point when talking about money. How about $5.99? That would be five dollars and ninety-nine cents, or five ninety-nine.

Remember, these rules only work with money. They can't be used to read other decimals.

Let's imagine you're shopping for a new water pitcher. You find two you like—one holds 0.7 gallons, while the other holds 0.5 gallons. Do you know which pitcher is larger? Click the arrows to find out.

How about these two decimals: