As we saw in Introduction to Addition, you can often use counting and visuals to solve basic addition problems. For instance, imagine that 3 people are going on a trip and 2 more decided to join. To find out how many people were going total, you could represent the situation like this: 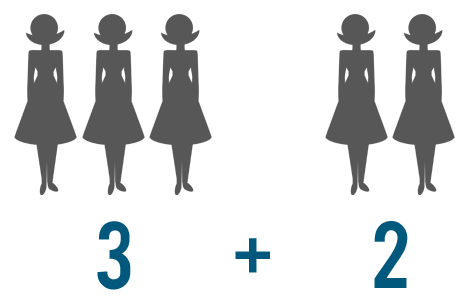 Once you look at the problem visually, you can count and see that 5 people are going on the trip.

What if you have a bigger problem to solve? Imagine that a few groups of people are going somewhere together. 30 people travel on one bus, and 21 travel on another. We could write this as 30 + 21. 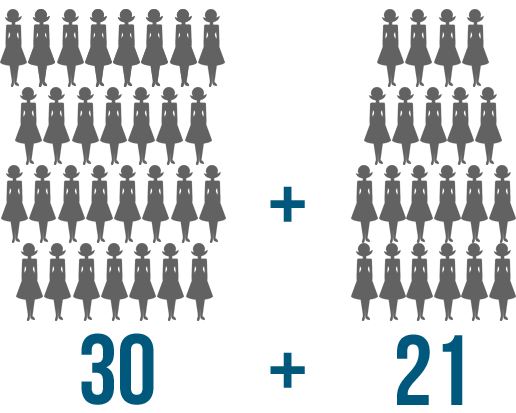 It might not be a good idea to solve this problem by counting. First of all, no matter how you choose to count, it would probably take a pretty long time to set up the problem. Imagine drawing 30 and 21 pencil marks on the page, or counting out that many little objects! Second, actually counting the objects could take long enough that you might even lose track.

For this reason, when people solve a large addition problem, they set up the problem in a way that makes it easier to solve one step at a time. Let's look at the problem we discussed above, 30 + 21.

To solve stacked addition problems, all you need are the skills you learned in Introduction to Addition.

As you saw, stacked addition problems are always solved from right to left. This means that you always start by adding the digits on the right.

Solve the addition problems below. Then, check your answer by typing it into the box.

Stacked addition can also be used for adding larger numbers. No matter how many digits are in the numbers you're adding, you add them the same way: from right to left.

Add these large numbers. Then, check your answer by typing it in the box.

On the last page, you practiced adding vertically stacked numbers. Some problems need an extra step. For example, let's look at the following problem: 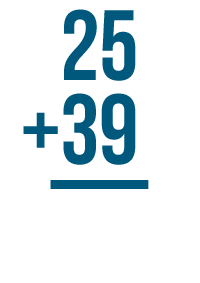 Our first step is to add the digits on the right— 5 and 9. However, you might notice there isn't room to write the sum, 14. When the sum of two digits in a math problem is greater than 9, the normal way of adding stacked numbers won't work. You'll have to use a technique called carrying.

As you carry, be careful to keep track of the various numbers. If you're writing problems down, be sure to write the carried digits in small print above the column of digits to the left.

Solve these problems by carrying. Then, check your answer by typing it in the box.

Practice adding these problems. You'll have to use carrying to solve some of the problems. There are 4 sets of problems with 3 problems each.